I don't like being negative about any aspects of our trip. But I'd be lying if I said it was all plain sailing. There have been moments where I have been ready to throw in the towel, utterly frustrated, miserable and fed up. There have been times I have tried to forget in terms of sanitation and wellbeing. There have been experiences which just straight up sucked. 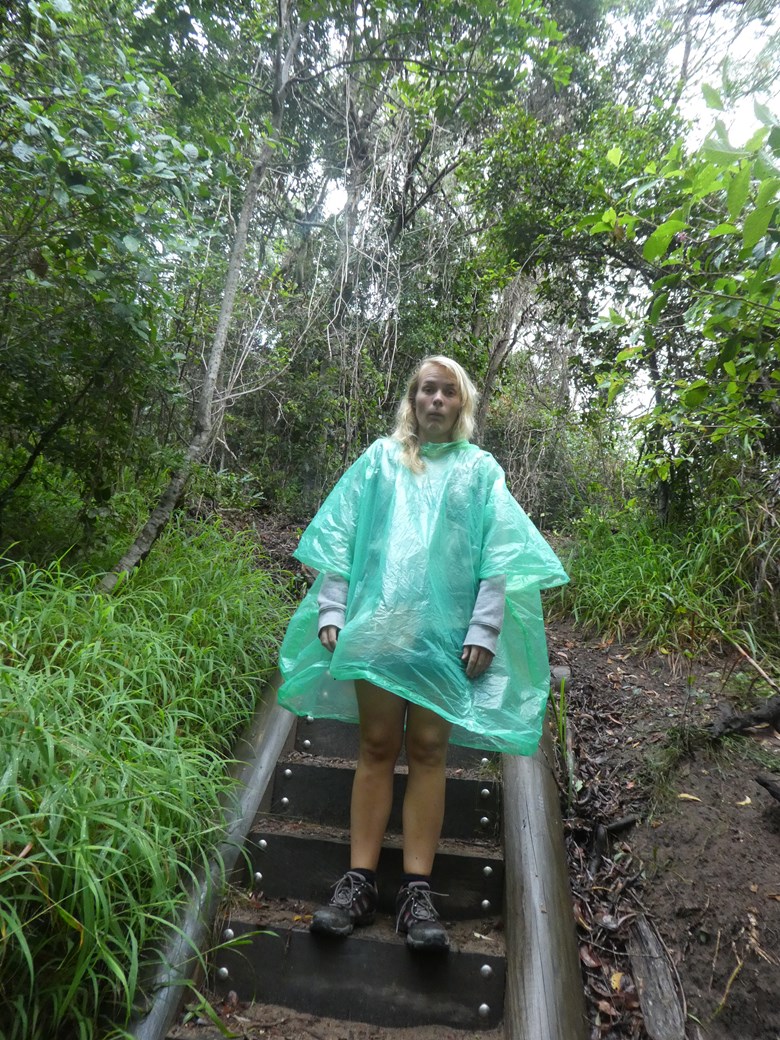 And for you, dear reader, I am going to dig deep and relive some of these horrible experiences.

We stay in a lot of hostels as they're cheap, and most of the time they're absolutely fine. Sure, you might not get as good a nights sleep as you would in a private room but earplugs are normally sufficient.

Singapore was a whole different kettle of fish. We arrived to our hostel after a sleepness night of travelling and the room was operated with a swipe card that made a bleeping noise whenever it was unlocked; this noise was to haunt me later.

The clientele were not the backpacking companions we are now so used to. They were all middle aged men, mostly Indian or Chinese, either looking for work in Singapore or what looked like recently thrown out of their family homes. It was very unsettling being the only young female guest. 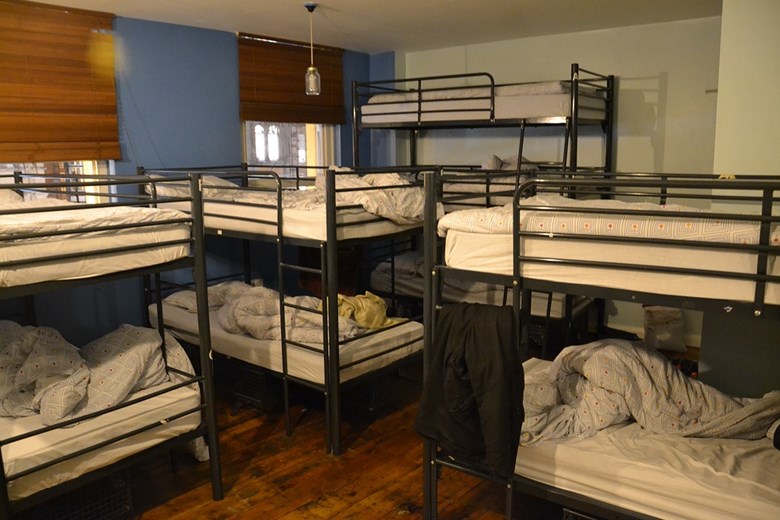 The rules for the hostel are to be quiet after 10pm and lights out in the room by 11pm if not before. Not for our room mates, oh no. At around 11pm, we settled down and turned out our lights after a LONG day of trying to stay awake in the city. Then the fun began. Endless streaming in and out of our room, the lock bleeping each time, fluroescent lights being turned on and SO MUCH NOISE. There was the man who had approximately fifty plastic bags and wouldn't stop rustling them; you thought he'd found what he was looking for but alas, he started afresh on a new bag. The father and son who kept finding excuses to leave the room and come back in, play loud music on their phone and play games with the sound on. In the middle of the night. The man who received a phone call at 1am, answered it and proceeded to shout down the phone for a good five minutes before I finally reached the end of my very British tether and hissed "Will you PLEASE be quiet!" - which of course he ignored, and I retreated under my blanket and tutted loudly.

The noise was constant. As soon as the room was dark someone turned the lights on again. That bleeping of the door will forever go round and round in my head. It was a horrible night - we had barely slept the night before as we had been flying to Singapore, Harry was ill and I was so drained. It was a horrible experience; needing sleep so desperately and being kept awake felt like actual torture.

Dodgy tummies are an unavoidable part of travelling. On the whole we have been considerably lucky, but of course, when nature strikes, it's always, always at the worst time.

We were getting a night bus from Chiang Mai to Bangkok in Thailand, and buses are always a gamble. Will you have air conditioning? Will there be a toilet? What you are told when you buy your ticket is almost definitely not what you'll get on board. 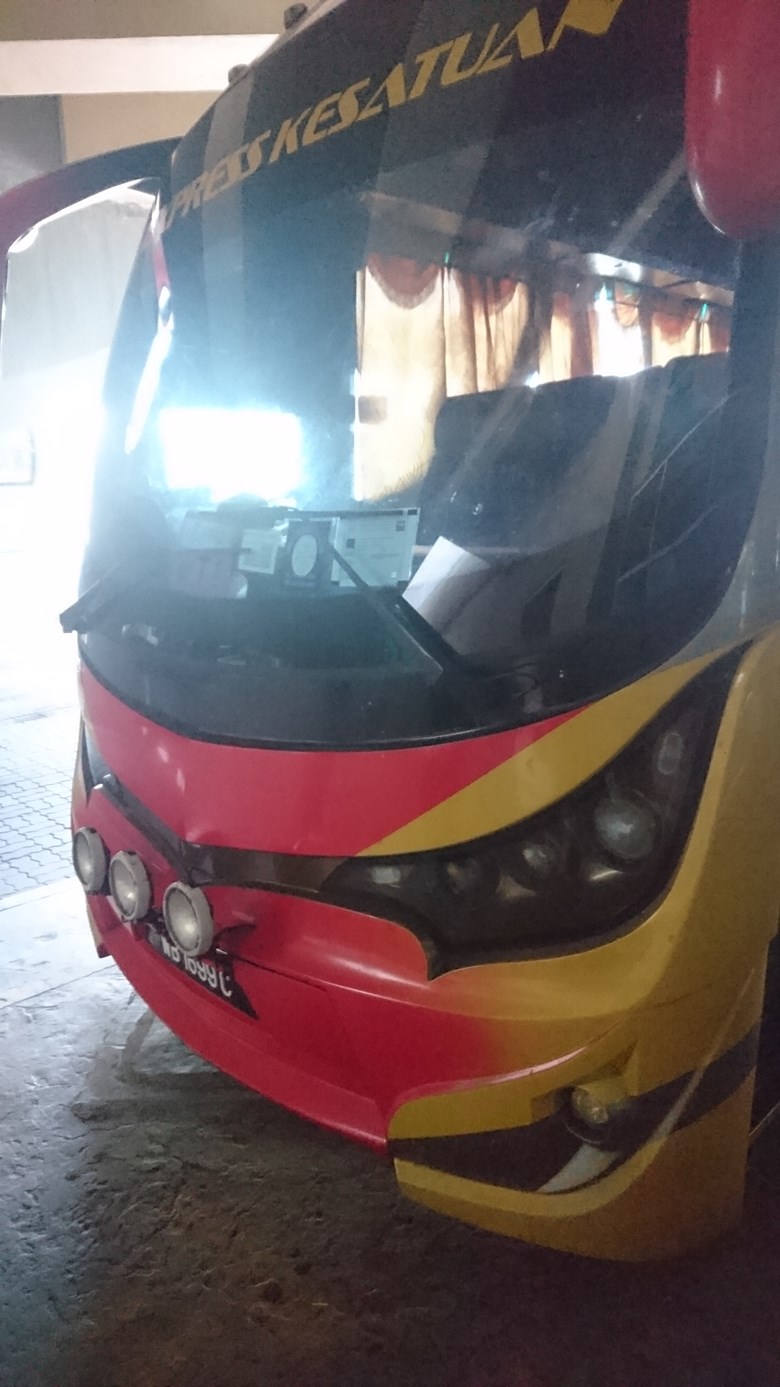 We were at the bus station waiting to board the bus, when of course, nature struck. I got that dreaded feeling of urgency and dashed to the toilet, especially panicked that I would miss the bus.

I flung some change at the toilet attendent and locked myself in the cubicle. Turning around, I realised in horror that it was a squat toilet. Aka a hole in the ground. Well - needs must. I'll skip what happened next, but the horror doesn't end there, oh no. I then looked around and my stomach dropped when I realised there was no toilet paper, AND no bum hose as is the norm in Asia. Just a bucket of water. 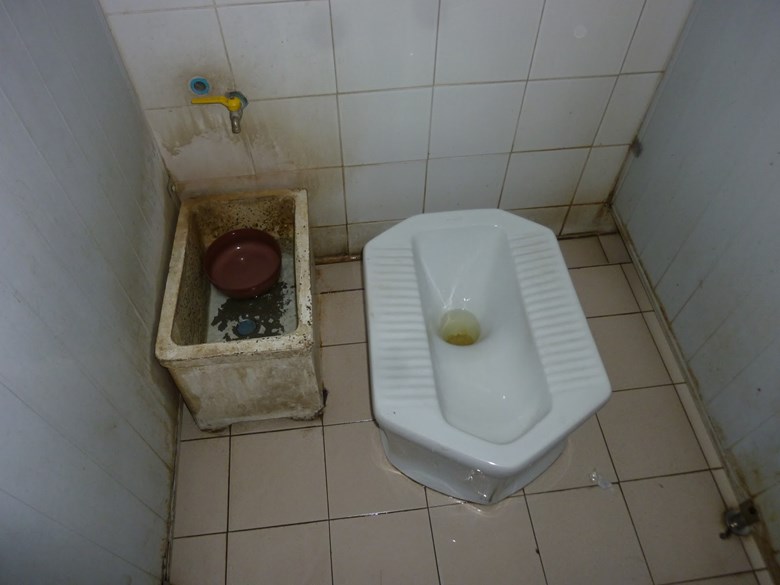 There was no time to think. I'll spare the gory details (I can't even believe I'm writing this on the blog, but this is a post about low points) I did what I had to do. I emerged from the bathroom palid and in silent shock about what just happened, filled with fear that I was getting onto a bus for ~10 hours with no idea if there was a toilet on board or not.

Luckily I made the bus just in time and sat in quiet contemplation, applying hand sanitiser every five minutes for probably the first hour of the trip. Happy to report that there was a toilet on board, and even happier that I didn't need to use it once.

Those who know me will know I've been on a bit of a fitness journey over the past couple of years. I was fully into my stride before we went travelling, and left feeling positive that we'd maintain some semblance of a healthy lifestyle whilst on the road.

Predictably, we didn't. We have been to the gym where we can, walked with our packs where possible and at times when being super keen done workouts in our rooms. 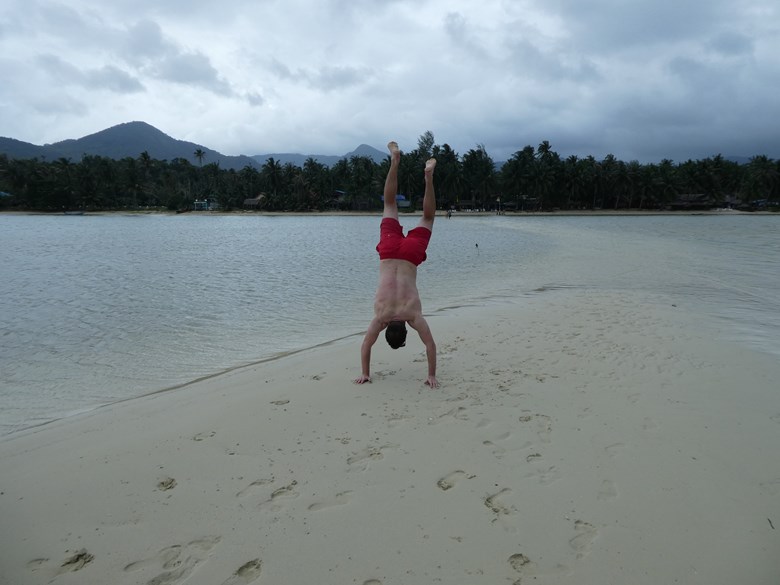 Sadly, as the months have passed by, we've become lazier, the lull of the travelling lifestyle pulling us slowly in and the relaxed mentality taking over. It's been brilliant: freeing, fun and great to indulge where you want to. But it's definitely taken it's toll.

My once-sculpted physique has become softer. The muscles I was so proud of have disappeared: the steel buns have dropped and the guns resumed to their wobbly selves.
It's really hard to see this happen. And even harder to accept that I have LET it happen. I am not as fit as I was before coming away and my body has changed a lot. I think I have possibly lost weight overall, but I've lost a lot of muscle and feel jiggly. 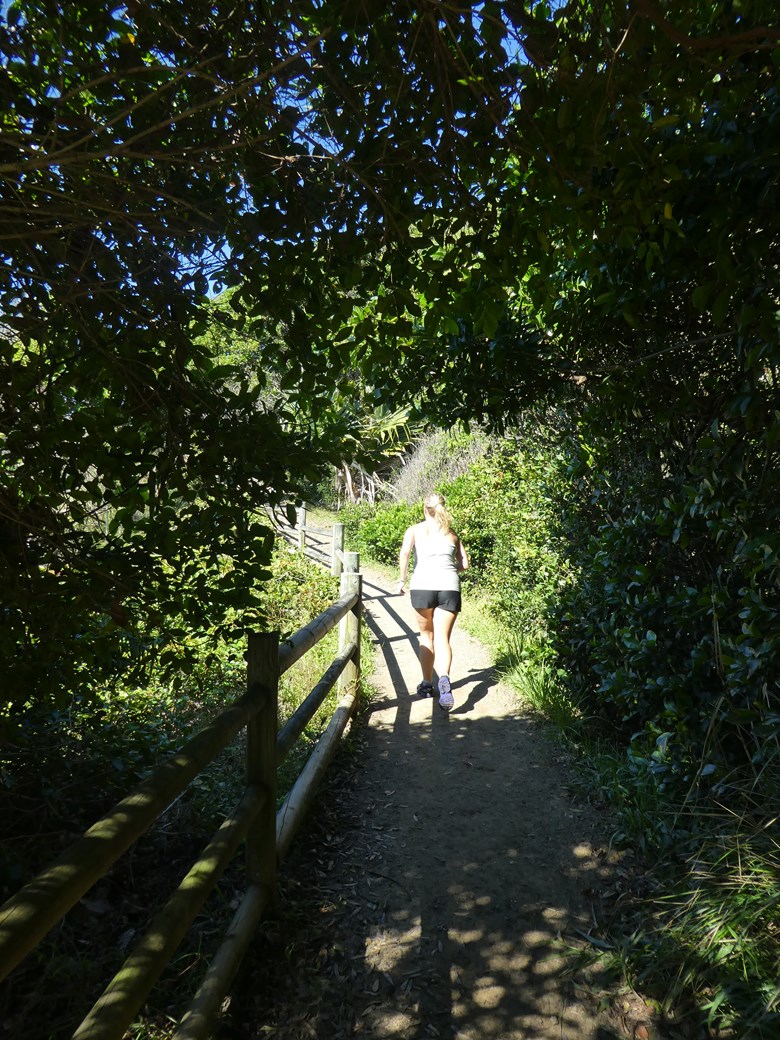 I get down quite a lot about it. Which is stupid, because if I want to change it, it is fully within my control to change it. We have stepped up the fitness recently, going on more hikes and returning to our daily press-ups that we started so keenly at the beginning of the trip, but deep down I know it's not going to be enough and until I return home, I'm never going to be able to commit to a strict routine. 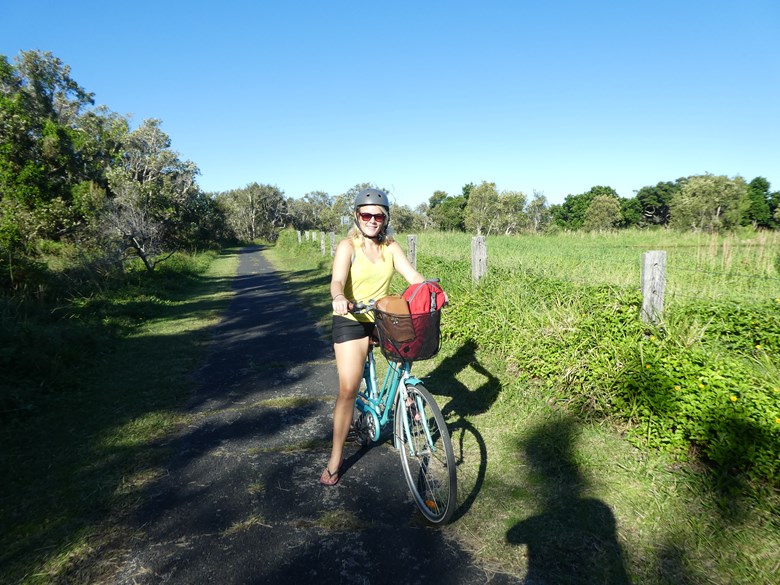 This is okay. This is to be expected. Most of the time I am great and have fun and enjoy my beers and relaxation mixed with my energising hikes, swimming, weight lifting.. But in those moments of despair, I can get really down on myself. The hard work that went into making all the changes before feels a waste (though I know it's not when I'm thinking clearly), now I'm just a lazy person who isn't happy with their body, what's the point in anything.. It's a vicious vortex, and one that is all too easy to get sucked into. Rather than being a specific low point, this is something I've had to battle with a lot during the whole trip and I'm sure will continue to do so for the remainder.

Harry mentioned this in his blog. But dear Lord, this was my utter low point. Following a morning of despondence and misery regarding my fitness problem - feeling utterly useless, ugly and completely apathetic towards any activity, Harry suggested we go on a hike to get our blood pumping again.

If that wasn't enough to put me in a stinker of a mood, I'd had barely any sleep because a guy in our dorm room was snoring like an absolute TRAIN the whole night, leaving me with just minutes of shut eye. 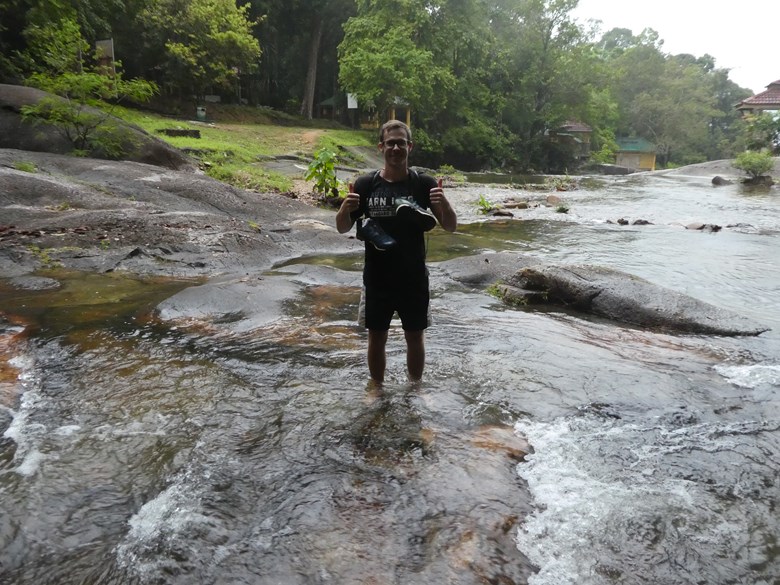 I blearily clambered the what-felt-like-millions of steps to start our hike, begrudgingly took off my shoes and socks to cross the river that was so eagerly rushing past, lapping viciously at the banks, and slipped and slid my way through the forest. If you've read Harry's post, you'll know that this quickly turned to torrential-rainforest. The path turned to a stream, my shoes were soaked, my poncho did nothing to keep me dry and with each step the ground got mushier and mushier. 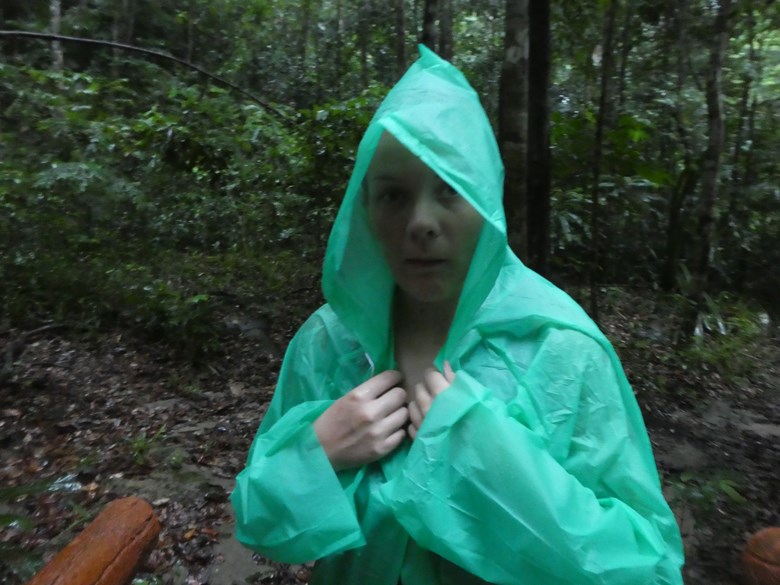 We hit a river that was just flowing too strongly to cross - I mean the rain was really hammering down - and I looked down and saw Harry had a worm on his sock. As I was about to tell him this, I looked at my leg and saw that I had a worm on my leg. I tried to flick it off and lo and behold, it was attached to me. It wasn't a worm, it was a *swearword* leech. Cue me shaking my leg, batting at it uselessly, and instantly bursting into tears. Harry managed to save me and I stood there, shaking in fear as he went to investigate if we could actually cross this damn river.

I looked down again and saw another *swearword* leech on my sock. This was too much, I pulled my sock away from my ankle and it tried to burrow into it. I screamed for Harry in a pitch higher than I've ever reached before, and by the time he stumbled over to me the leech had attached itself to my finger. They move like slinkies going down the stairs. It's disgusting. I was flinging my hand around like a mad woman trying to get rid of it, but of course it didn't let go. It was too busy sucking my blood. I was sobbing, nay, wailing. In full on ugly cry mode. Snot, tears, saliva - the works. Harry got rid of the leech and I was no less than hysterical; he took control and said 'let's leave, NOW. WALK.'

I set the pace on the way out of this godforsaken jungle, where the ground was now literally flooded with leeches. I would have been running had I not believed I would break my neck slipping on a stray tree root. The rain mimicked a monsoon, I could hardly see, and the tears just kept streaming. Every few paces I stopped to check for leeches, my sodden poncho sticking to my skin making me feel like they were all over my body. I cried and cried and cried; from fear for being attacked by leeches, and from sadness at feeling like I had failed on our first foray back into fitness. The leeches sucked not only my blood, but the small amount of hope I had had for that day.

Now, please remember these were just a few really low points in 4-5 whole months of travel. I want to keep it real for you all at home, nothing is without challenges! But I had the most amazing time in SE Asia and if you're in need of a boost after that traumatic read, check out my high points here:  http://travellingwrong.com/sinead-s-high-points