One of the most popular things to do on Bali is trekking - climbing mountains and volcanoes, walking through jungles and hiking across the rocky landscape. In Ubud, you can hardly walk 50 meters without seeing an offer for the 'Mount Batur sunrise trek', and we had already been told by a number of travellers who had been to Indonesia that it was one of their top experiences. Even though we tend to avoid really touristy things, we're suckers for nature and a challenge so it became top of our to do list whilst we were there too.

Lagas hostel organised the trip for us for a fairly reasonable price - though the descriptions of some of the things included left a lot to be desired in reality. We tucked ourselves up in bed early that night, ready to be collected at 2am - to make it to the summit for sunrise, you have to start in the middle of the night. 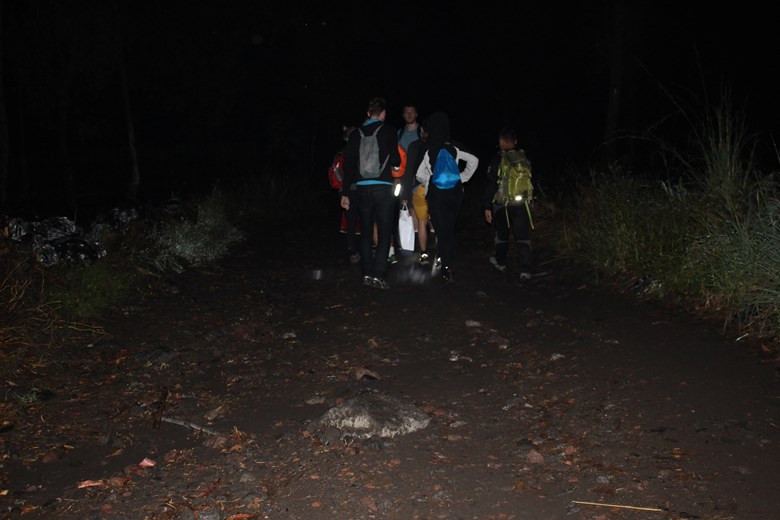 We stood outside our hostel rubbing our bleary eyes waiting for the van to arrive. Eventually it pulled up and we clambered in greeting our fellow passenger, realising as the van pulled away that we had just climbed in without a word to the driver! Luckily it was our van taking us to the correct place, and not someone who had just pulled up wanting to kidnap 4 idiots in the middle of the night! 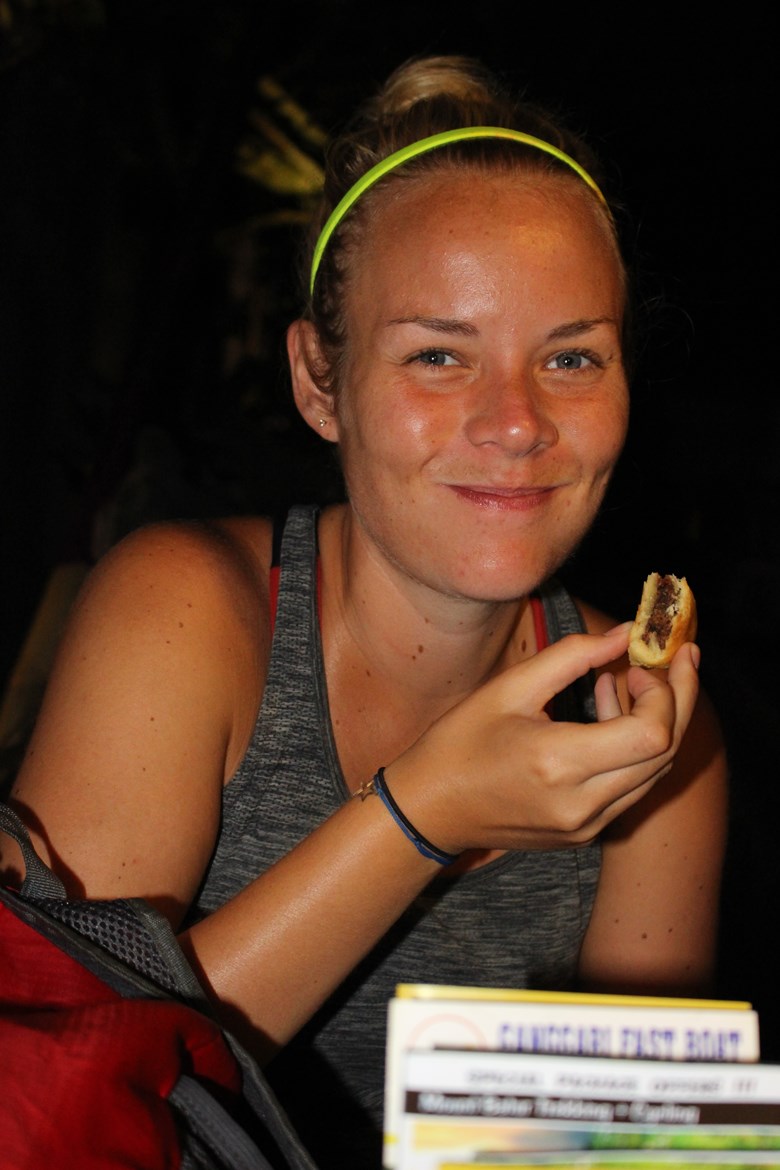 We were taken to a small restaurant and given a coffee and a strange sweet pastry-cake thing which we think was filled with red beans. We were also given a box of snacks, aka 'breakast' to eat at the top of the volcano. A banana, two slices of bread with jam and an egg. We had been led to believe we would cook this egg in the volcanic steam at the summit, but it turns out the egg had already been cooked. And I doubt it was cooked in volcanic steam. This, however, was to be the least of our disappointments. 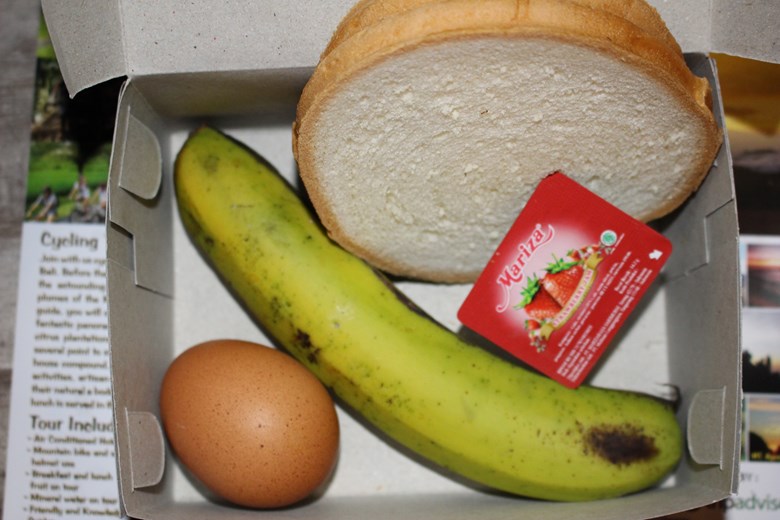 We were soon ferried off back to the van where we continued our journey in the dark down windy roads and up to the North East of the island. We soon pulled up in a bustling car park full of vans, buses and people milling around - our dreams of a private experience shattered (of course - they must have thousands of people doing this trip every day).

We were introduced to our guide, a lady who spoke minimal English, and advised to use the bathroom because obviously there was no where but nature for the next few hours. We were then all given torches and we set off in the dark. We put on an extra layer as it was pretty cold at 4.15am, and it had started to drizzle.

We trotted along behind our guide down a slightly muddy path through thickening forest, quietly confident at this stage. We were making great time and not even out of breath! This was short lived, as after about 20 minutes the terrain started to change: gone were the flat roads and instead, pieces of volcanic rock formed the path and we started to ascend. This part was okay - we climbed upwards for a while and stopped for a brief water break whilst stripping off our extra layers as the sweat had already started dripping. It was very humid and whilst the temperature wasn't too high, the physical activity made everything a lot hotter. 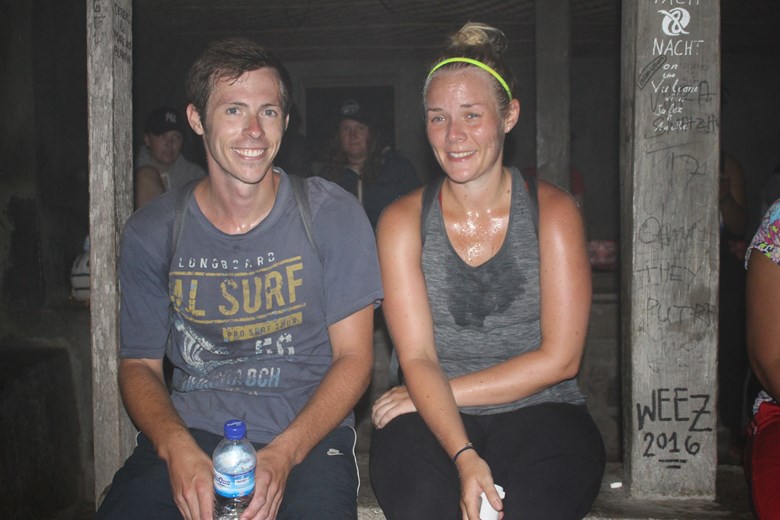 Over the next hour and a half, the terrain went from bad to worse - the rocks turned to stones, stones turned to dust and we scrabbled our way up steep inclines, clambered over sharp rocks and tried to avoid thinking about the fact that one wrong foot would mean us toppling down the whole face of the volcano. As we gasped for air, sweating profusely, wearily dragging our bodies up each gigantic step, our guide was easily bounding ahead of us, looking back occasionally to check we were still alive whilst barely breaking a sweat herself. I have no idea how old she was - I am guessing around 50 - and she was strong, fast, and could probably go up and down that volcano twice in the time it took us to get up (and we made pretty good time!)

We reached the final rest point and were told that the summit was 20 minutes further. It was dark, wet and extremely windy but we had come this far and wanted to make it through the cloud to see the sunrise. So on we went, slipping on fine sand as we climbed an almost vertical hill. When we reached the top, we saw people huddled together in jumpers, sitting on the floor waiting for the sunrise.

We were given rugs to sit on and we grouped together, staring into the dark mist in front of us as our hot sweaty bodies quickly turned freezing. The wind beat against us, and our extra layers were rendered useless as everything was so damp. I was even wearing a spare pair of shorts as a make-shift scarf which had no effect whatsoever. We saw people eating their breakfast and wondered whether we were supposed to eat ours too. Dogs ran around trying to steal food, and a few more people made it up the final part of the climb.

All of a sudden, it seemed to be a lot lighter and we could actually see... The sun had risen! It just so happened to have risen behind the cloud that we were sitting in - so not one bit of sunrise was seen. Not one beautiful summit picture to make it all worth it! Dejected, we gobbled down our stale bread and mushy bananas and asked our guide to take us down. Our bodies were so cold and aching from the ascent, and we still had to get all the way back down! The sole of Alex's shoe had also fallen off upon reaching the top (the piece de resistance of the climb) so he was keen to get down in one piece, feet in tact. 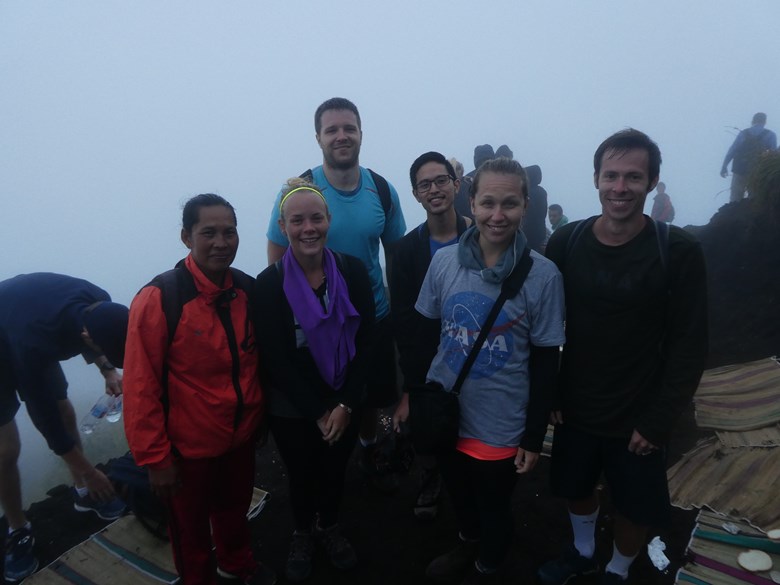 As our guide danced merrily down the volcano and we tried our best not to fall head first into the crater, we did get some fantastic views and as you'll see, some amazing photos. The descent took around 1.5-2 hours and we were all absolutely exhausted at the end of it. It's advertised as an 'easy' hike - we are all physically fit and found it tough, by no means would I recommend it to a total beginner or someone with injuries as it is physically demanding and a lot of the time you're not on stable ground. There's a lot of scrabbling and clambering and hoping for the best.

Whilst we missed the sunrise, I'd still say it was one of the best things we've done on the trip so far - it was a huge challenge, we had a great laugh and we did see some fantastic nature on the descent. Maybe next time we'll get the sunrise ;) 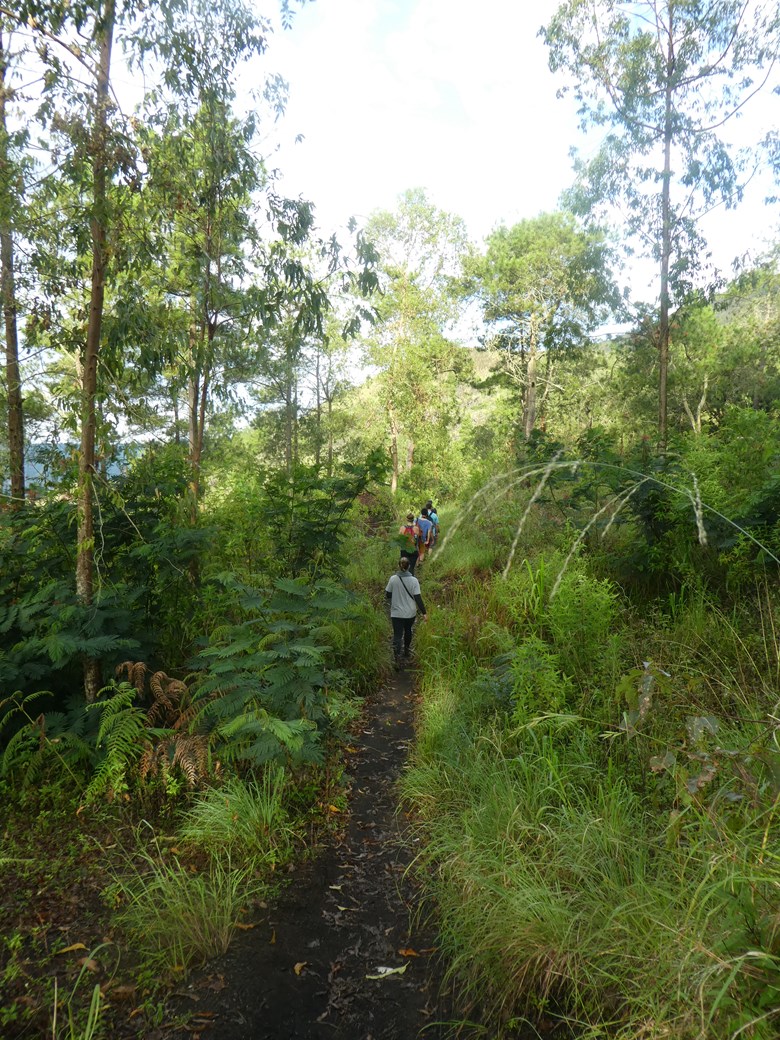 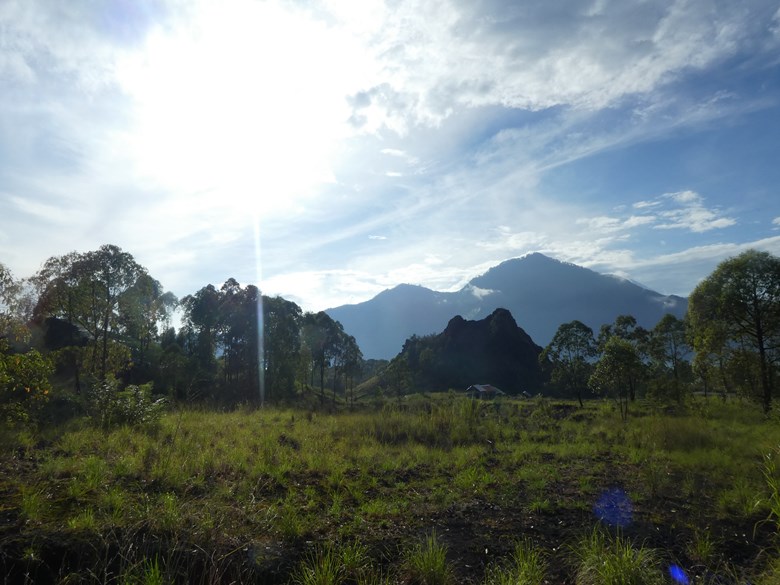 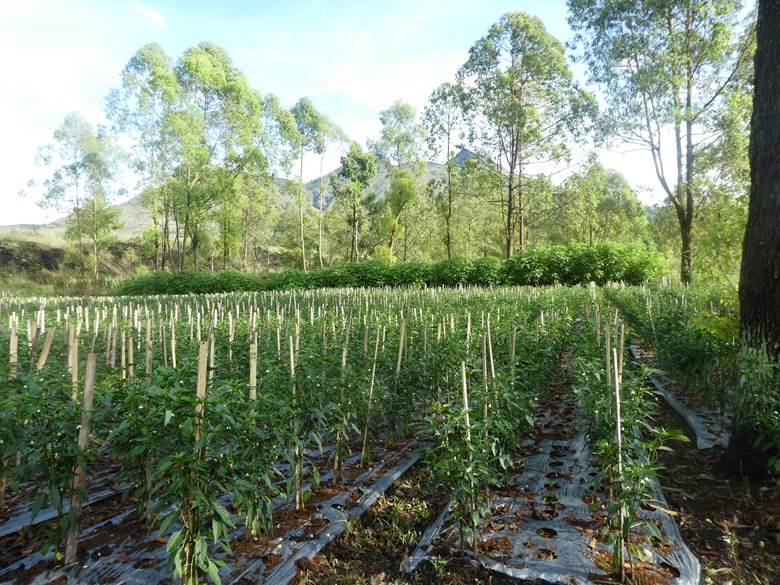 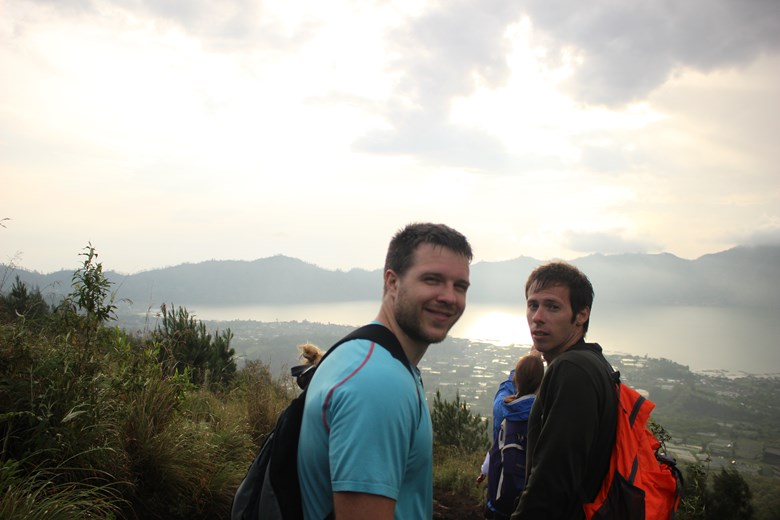 Up next: Manila Who? Previously: Tokyo: Sushi, Snow and Socks for Hands